With my current project I need to find Australian BSB numbers for particular branches several times a day. BSB stands for Bank State Branch and identifies an individual branch of an Australian financial institution or bank.

Until nowI used official BSB search tool to find all these numbers, but recently I came up with a different BSB search website - it has clear and clean layout and information presented in a very convenient form. But what's best it has a Google map of every bank branch in the area! So if I want to look for bank branches in a certain suburb or town - I can easily see where they are located!

So if you are looking for BSB codes for your bank or financial institution I highly recommend Search BSB website!
No comments:

Buenos Aires is the capital city of Argentina, one of the biggest Latin American cities and a cosmopolitan metropolis and I had a chance to visit it recently.

Here some point of interest of Buenos Aires:

It is considered one of the most important lyric theaters in the world. It was opened on May 25th, 1908, with the production of Verdi's opera Aida. It was constructed in three stages by the architects Francisco Tamburini during the first one, followed by Victor Meano, and finally, by the Belgium Julio Dormal. Its more remarkable characteristics are its central hall, the golden room, the white room, and the important dome with a mural painting created by the Argentine artist Raúl Soldi in 1960.
Its excellent acoustic, its repertoire and the artistic quality of its performers contribute to its worldwide prestige.
It has been declared National Historical Monument.

This district is an historical and architectonic reserve, as it gathers buildings from de 18th, 19th and 20th centuries, and preserves, at least in part, the cultural patrimony of Buenos Aires through the activities carried out by the City Museum.
Narrow paved streets, colonial houses with forged iron gratings, and buildings constructed in English, French and "art noveau" styles, can be admired in this district.
Artists and artisans chose this district for their ateliers and residences, occupying the old colonial houses, so don't be shy to ask travel tips from them. San Telmo, a district rich in histories and anecdotes, at present is the site of the most important antiquarian market place and a center where tango is played and danced.
On Saturdays, Sundays and Business Holidays artisans display their booths in Plaza Dorrego. 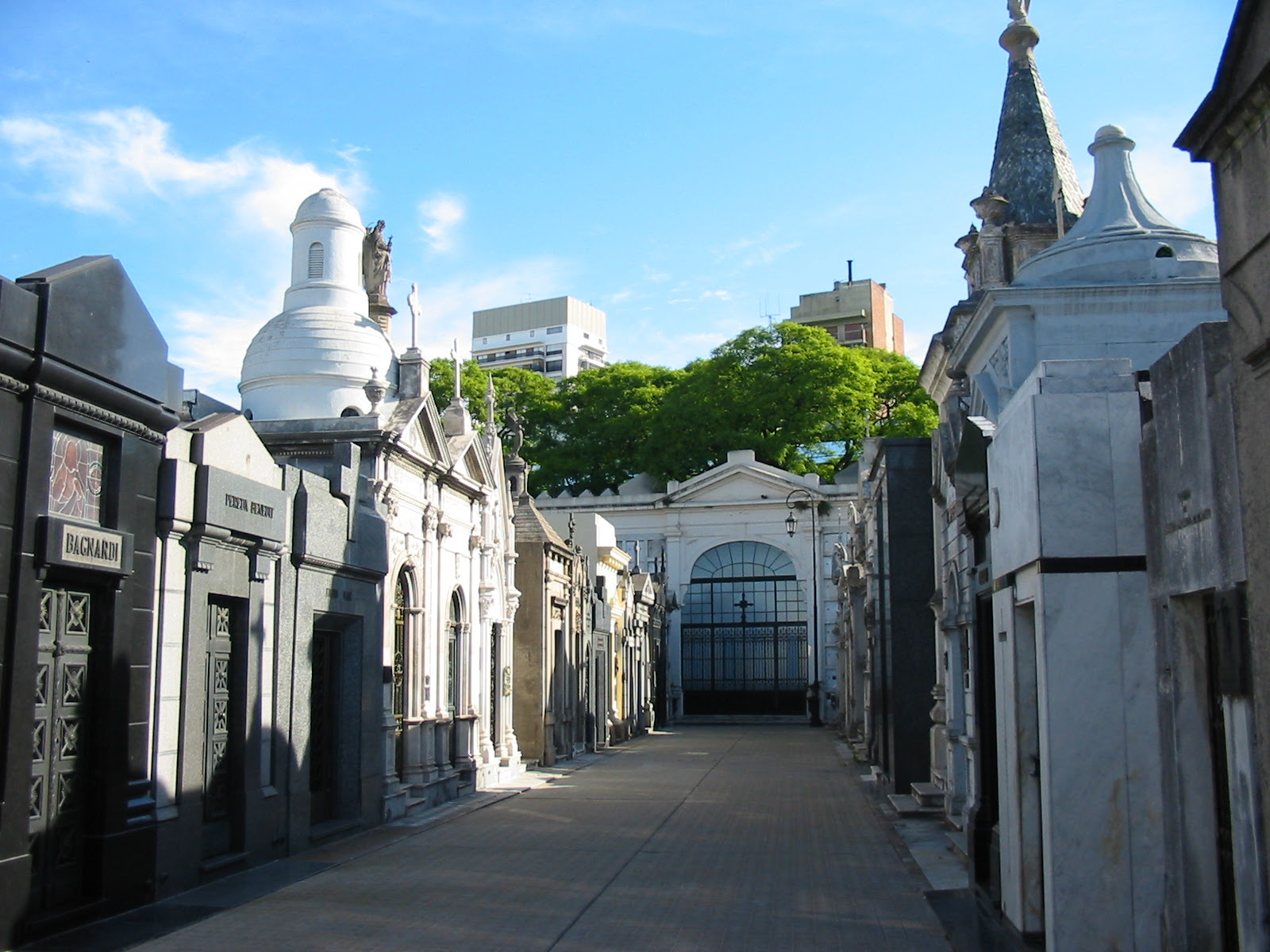 This exclusive district gathers historical buildings, excellent restaurants, discotheques and cafés in a magnificent environment. Its name comes from the Recollet Monks' Monastery, close to Pilar's Church, built in 1732, and the historical cemetery, with its monuments and crypts where heroes and aristocratic families are buried.
In this district we can also find the National Library and Buenos Aires Fine Arts Museum, the "Palais de Glace" (the Glass Palace), Buenos Aires University Laws Faculty, and Recoleta Cultural Center. These places give an artistic and cultural aura to this district.
This is the most "European" corner of the city, with its squares full of street-artists, "living statues" and high level spectacles.
It is a good habit to drink a coffee outdoors, at "La Biela" bar and look at people that go by.
It has an active nocturnal life center of local jet set and a pleasant pedestrian walk during weekends.
On Saturdays, Sundays and Business Holidays craftsmen also display their booths in Plaza Francia. 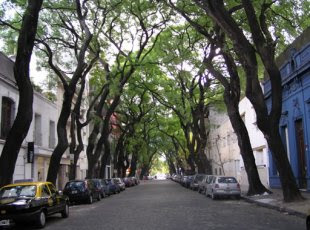 Del Libertador Avenue is the main artery of this district, plenty of trees, with magnolias, jacarandas trees, timber trees, pines, araucarias and different kinds of palm trees. Its woods and gardens are the main green lung of Buenos Aires. On Sundays families walk around the lakes, practice sports, ride on bicycles or have sun bathes.
Palermo is one of the jewels of Buenos Aires and going over it is an amazing experience as, for example, meet Sarmiento´s Monument, created by the sculptor Auguste Rodin in 1900, the rose garden, the Andalusian yard (a present of Seville to Buenos Aires), Galileo Galilei Planetarium or the beautiful deer made in bronze by the French sculptor Le Coutier.
Palermo is an elegant district, with exclusive buildings and tearooms. It is a zone of embassies and museums, too. The main convention centers of Buenos Aires are there: Palermo's Fair Property and the Municipal Exhibitions Center.

With only 100 m long, now this street is for walkers, and is as short as peculiar. No doors are opened to it, only some windows or a balcony with plants or wet clothes. A branch line of a railway crossed this place until 1920. Then it was abandoned until a neighbor cleaned it and proposed to open a path to shorten distances. He called it "the curve", and every day a well-known musician, Juan de Dios Filiberto, crossed it. He created a famous tango, which he named "Caminito" ("the little path" in English).

The neoclassic style prevails. It has an admirable high altar built at the end of 18th century, as well as the Crucifix cut in only one piece of carob tree.
Other important characteristics are the Sacrarium Chapel, with delicate marbles and bronze details.
General San Martin Mausoleum, the main Argentine Independence hero, created by the French sculptor Albert Ernest Carrier Belleuse, is located inside the Cathedral.
No comments:

Science plays an interesting role in the world of life insurance, both for insurance companies and potential clients. Due to medical advances, individuals live longer than in previous generations. They also survive accidents, diseases and other traumas at higher rates. Consequently, the decision to select a certain insurance policy is not as black and white as in the past. The definition of old age is constantly changing, as is the notion of terminal illness.

For insurance companies, science influences when an individual decides to invest in insurance as well as the type of plan. Individuals may wait longer until the likelihood of mortality is high enough to support the investment. Individuals also may opt for shorter term insurance policies versus universal plans. Since most individuals invest in insurance policies to help their dependents in case of death, they may only desire coverage until their children are adults.

One of the first illusion and life science experiments in Soviet Union.


Russian scientists "detach" a dogs head for the purpose of testing and research artificial life support in pre-soviet republic.

The dog is awakened in this video after having it's head surgically severed and is experimented on to determine if the animal is lucid, and to document the technology in this film reel:

Is this life science experiment for real? You wish...
1 comment:

In this video Professor Jay Phelan introducing non-Life Science Majors to the Life Sciences, challenging them to explore and understand important issues in the field. Topics include chemistry of life, genetics, physiology, evolution, and ecology - all explored in lecture and debates.

Life Science course takes place at UCLA in Fall 2007 and Professor Jay Phelan has a Ph.D. in Biology from Harvard, and masters and bachelors degrees from UCLA and Yale.

Is a career in marketing within the life science market a direction that you would like to consider? If not now, perhaps in the future? What is the the pros and cons of making this move? What it is like to move away from the bench into this line of work?

Life science suppliers are increasingly seeking new market opportunities where molecular, proteomic and cellular techniques are being utilized for new applications. Researchers in what are referred to as 'applied markets' frequently use many of the same techniques, and hence products, as their colleagues in the traditional life science market. But their more recent adoption of advanced research technologies suggests they are more likely to be open to learning of the broad array of solutions offered by life science suppliers. This hypothesis places a premium on effective marketing tailored to the unique needs of researchers in applied markets.


Joe Walsh was graduated from the Princeton in 1956.

He prepared for Princeton at the Canterbury School, where he was active in sports, publications, and dramatics. At Princeton he participated in club sports for Cap and Gown, played varsity baseball for three years, and wrote his thesis on H. L. Mencken for the American Civilization Program. In his senior year, he roomed with Jeff Dunkak and Mark Grassi in Blair Hall. He retired in 1993 after a 37-year career with New York Telephone Co. and Nynex Corp. He served on the boards of Unity Mutual Life Insurance Co. of Syracuse, M&T Bank of Syracuse, the New York Medical College, and USA Datanet of Syracuse.

He devoted himself to community service as president of the Assn. of Mentally Ill Children of Westchester, as general campaign chairman for the United Way of Central New York State, chairman of New York State fundraising for the 1984 Olympic games, chairman of the Syracuse Symphony, and as a board member at LeMoyne College and the Apawamis Club, Rye, N.Y.

To his wife, Patty, children Elizabeth ’83, Joe ’86, and Mark ’90, and six grandchildren, the class extends deepest sympathy.
No comments:

Careers Away From the Bench

Could you be missing out on an exciting and rewarding career outside of academic or industrial research?

Increasingly, Ph.D.-level scientists are becoming aware of other career opportunities beyond bench research. Join the workshop to consider what your own career path in these so-called "nontraditional" areas might look like. We'll discuss the types of alternative careers available, how to parlay your current skills and values into a new area, ways to research career options, and how to develop the skills you might need. At the end, we’ll touch briefly on how to make your job search successful.

Get career away from the bench!
No comments:

This is very cool, chocolate in the shape of a constituent molecule of chocolate.

The full story is here.
No comments:


The perfect aphrodisiac and vitalising tonic for both men and women. Can support or improve any of the following: • Libido/Sexual Desire • Energy & Stamina • Erectile Dysfunction • Sperm Production • Sensory Stimulation

Viagra, a popular pharmaceutical, works by blocking the production of the PDE-5 enzyme.


It actually works by blocking the activity of PDE-5, not the production of the enzyme. Both inhibition of Nitric Oxide synthesis and PDE5 activity are viable mechanisms for inducing erections in men, but does it work?

Going to pubmed and searching for "Epimedium" returns eight pages of results, limiting these to English language returns four pages. Scanning through these results there are two articles that may be of interest.

First, one study demonstrated that doses ranging from 300 microgrammes to 10,000 microgrammes, injected directly into the region of the penis known as the corpus cavernosum, resulted in an increase in blood pressure in the rat penis (Chen and Chiu, 2006).

So, some evidence that it may work through the mechanism claimed, but no evidence that it produces an effect by oral dosing, even in animals. Next up, the wikipedia article claims that the active component is a compound known as icariin. So, what is the evidence there? A couple of articles report icariin having an in vitro IC50 of around 1 micromolar against PDE5 (Ning et al, 2006 and Xin et al, 2003) which is a reasonable potency.

However, there is nothing on the compounds pharmacokinetics in humans or even rodents. So, all this in vitro work, interesting though it is, may be of no use if the compound is not absorbed by the intestine.